So I know it’s been a while since my last blog post, mostly because things here have been crazy busy, and partially because I haven’t had anyone to bake for, and living with just 1 other girl for the summer, baking means that no matter what I will end up eating at least half of whatever it is.

When my good friend Julie, who is spending her year volunteering in Equador (check out her blog here), invited me to her going away party, I of course volunteered to bring cupcakes, and I was super excited about it. I found a recipe for margarita cupcakes (which I will post tomorrow) and I have been dying to make them.

After learning that there would be kids at this party, I thought it would probably be a good idea to make some vanillia cupcakes too. 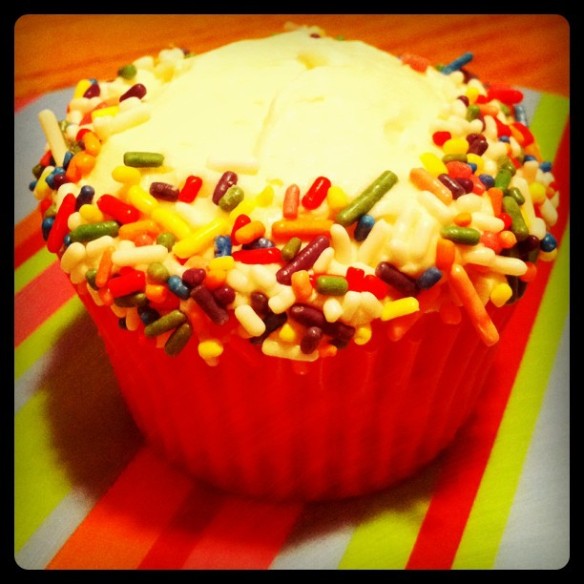 Earlier this week as I was perusing pinterest, aka my new obsession (if you don’t have it request an invite here) I found some tips for making a cake mix taste like a homemade cake. So instead of adding water add buttermilk, instead of oil add butter, and on top of that add a teaspoon of flavoring, since I was using a yellow cake mix I added vanilla extract.

So I mixed it all up, and it came out super thick, like the spoon is standing up on it’s own in the batter, almost like cookie dough.

But I thought, well maybe this is how it’s supposed to work, and I just went with it. After watching them for a while they seemed to be cooking like any other cake would, and then all of a sudden I checked them and I couldn’t believe it, all of a sudden the tops were golden brown, just like a cookie.

I was hesitant to try them, but they actually don’t taste too bad. The cake is VERY heavy, and although from now on I will probably always make my cupcakes from scratch, I think that these add-ins would be fine in a pinch. I would suggest though adding either the butter or the buttermilk supstitutes, not both. (Oh and side note, don’t ever try to drink buttermilk, it is disgusting…not that my roommate and I tried it or anything)

Oh and my last tip, if the cake is just okay, a good frosting goes a long way, and sprinkles help too! Has anyone else ever tried to “dress up” a cake mix?